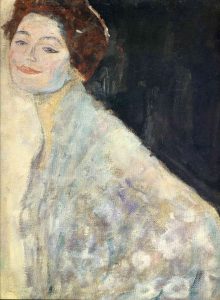 My memories of Angela Marchmont’s origins are oddly vague. I developed the character when I was in the process of plotting The Murder at Sissingham Hall back in 2008, but despite the copious notes I made I still can’t remember where she sprang from. In fact, looking at my notebook it seems as if she didn’t even figure in my plans for the story until I’d got quite a way into outlining it (perhaps this is why she seems such a peripheral character in Sissingham—I wanted her as my detective, but perhaps she herself was uncertain and decided to hover at the edges until she could prove herself worthy of another book). The very first mention of her in my notes says, ‘Angela Marchmont—will have to be eccentric?’ And that’s it, so far as character development goes. I also have a physical description of her that says, ‘Angela: tall, richly dressed. Attractive, looks like a Klimt portrait [this one pictured, if I remember correctly]. Wears blues, greens, shimmering tones. Dark curly hair, bobbed.’ (Incidentally, her appearance has changed a good few times in my head since that first description in 2008, and she now seems to have settled down into something resembling a young Norma Shearer.)

As it transpires, my characters prefer to leave the author out of the process and develop themselves with as little interference from me as possible. Angela obviously had no desire whatsoever to be eccentric, and as the story went on revealed herself to be decidedly calm, sensible, competent—and not a little mysterious. I can’t say whether this last aspect of her personality was deliberate—it might even have come about because she was also a bit of a mystery to me, her creator—but as time passed her inscrutability became something of a feature. She obviously had secrets she had every intention of keeping to herself, and she clearly wasn’t the sort of person to wear her heart on her sleeve. I knew she was a ‘career woman,’ and I knew she was in finance, but that was about all. I hadn’t quite decided where Mr. Marchmont came in, but I knew there was some story between them, and that he’d turn up sooner or later—as he did, of course, to his own detriment.

So Angela developed quite naturally by herself, and it was nice to discover more about her as the series went on, and spend time with her, since she also turned out to be a very charming and likeable person, and not at all ground down or defeated by her chequered past. I wouldn’t call her an action woman exactly, but she proved herself perfectly willing to act if circumstances required it. She’d done dangerous intelligence work during the First World War, so we knew she was courageous and resourceful. She was clever, but also kind and compassionate, with a dry wit and a keen sense of fun. In fact, as the series progressed I began to be concerned that she might be a bit too perfect, which can be dull for a reader, as most people like their favourite characters to have at least some flaws. I needn’t have worried, however, since it was eventually revealed that she had faults enough, but was merely very good at keeping them well hidden. As we found out, she was wilful and unconventional, with a certain disregard for the rules—or at least, an inclination to pick and choose the ones it suited her to obey. She was also cool and unemotional, with an added touch of self-satisfaction. She had a pronounced tendency to get involved with the wrong sort of man. And she certainly could have done better by Barbara, who was left in the dark about the secret of her parentage far longer than she should have been (and, I think, was remarkably forgiving when she found out the truth).

Angela was punished for her mistakes, and severely. I did terrible things to her in The Scandal at 23 Mount Street (which, incidentally, I never quite intended to be as dark as it turned out to be, proving that we writers aren’t always in full control of our creations), after which we found out the true extent of another of her particular characteristics: her icy self-possession. A lesser person would have crumbled under the ordeal of her trial and the subsequent events, but she stuck her chin out and absolutely refused to buckle throughout her final investigation in The Shadow at Greystone Chase. Only at the end did we see her iron self-control crack and discover that she did, after all, have a human side.

I’m not ashamed to admit I love Angela and thoroughly enjoyed writing her adventures. I was very sad to say goodbye to her, although I couldn’t resist giving her a happy ending. Will we see her again? I won’t make any promises, but I imagine Mr. Valencourt is going to prove something of a handful, so it’s always possible she might turn up again at some point…