Excerpt: The Mystery at Underwood House 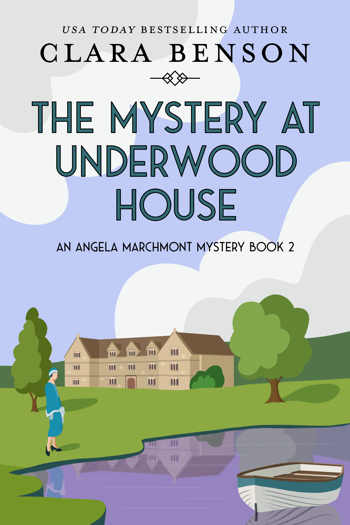 ‘I’ve always thought this was such a pretty spot,’ said Stella, ‘but it’s been spoilt now. I shall never look at it in the same way again.’ She stood up and shivered. ‘Let’s go back to the house.’

‘My shoe-buckle has come undone,’ said Angela suddenly. She bent over to fasten it, then gave an impatient exclamation. ‘I think it might be broken. Do go ahead. I shall catch you up.’

Angela busied herself with her shoe as Guy and Stella disappeared into the woods. As soon as they were out of sight she straightened up and went cautiously over to the fallen tree trunk. Something was sticking out a little way from a crack underneath it. With a little difficulty she succeeded in extracting the thing carefully and brushed the dirt off it. She stared at it, puzzled. Although it was damp and faded and part of it was torn away, it was unmistakably a photograph of a pretty young woman. The picture had evidently been trapped in the crevice of the tree trunk for some time, and was so damaged that it was impossible to judge how old it was, but Angela guessed it had been taken some years ago. Just for a moment she thought she recognized the face, but then almost instantly the impression was gone and she shook her head.

She heard the others calling her and, recollecting herself, thrust the picture in her pocket and hurried after them. Was the photograph connected to this business? If so, how? And who was the woman?

« Return to The Mystery at Underwood House