Excerpt: A Case of Perplexity in Piccadilly 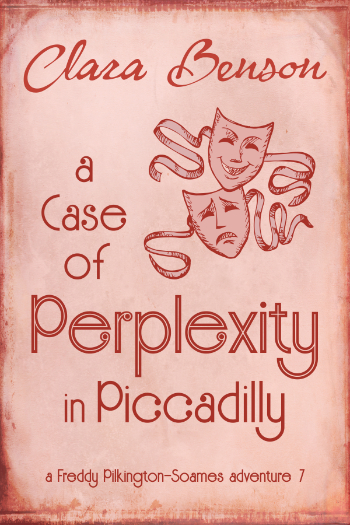 Here he was, then, with Lady Featherstone and Mrs. Belcher, in among an earnest-looking crowd outside the Calliope Theatre, and with the prospect of a long evening ahead of him. Next door was the Jollity Theatre, currently showing Have At It!, a light musical entertainment which Freddy had seen and enjoyed a week or two earlier. There was already a crowd outside, and the atmosphere was one of great cheer, in stark contrast to the queue of serious theatre-goers outside the Calliope. Freddy regarded the lively scene enviously, but there was no escape from his duties, for the doors had opened and they were now being admitted. Freddy, on his best behaviour, took charge of the tickets, saw to the ladies’ coats, and procured the programmes, then they all stood in conversation as Freddy did his best to entertain. The tickets had been bought at the last minute, and since it was a fashionable new production it had been impossible to get three places together. Lady Featherstone and Mrs. Belcher were therefore accommodated in two adjacent seats with a reasonable view, while Freddy was placed on the end of a row much further back, behind a woman wearing a large hat. This was an annoyance, but Freddy consoled himself for his poor view of the stage with the thought that since he was also well hidden from the sight of Lady Featherstone and Mrs. Belcher, at least he would not have to pretend to pay rapt attention for the whole play. Further considerations very quickly presented themselves, and he toyed with them idly in his head.

At seven o’clock prompt, the lights went down and there was a brief buzz of anticipation from the audience before the curtain ascended upon a bare stage and the play began. His half-formed idea having coalesced into specific intent, Freddy gave it a minute then rose silently from his seat, made his way out of the auditorium and emerged into the street. Five minutes later he was sitting in a comfortable front circle seat at the Jollity Theatre, and settling himself down to enjoy the evening performance of Have At It! He had taken care to inform himself of the approximate time of the interval at the Calliope, and was confident that provided he returned and showed his face at the expected moment, nobody would ever discover the deception.

« Return to A Case of Perplexity in Piccadilly