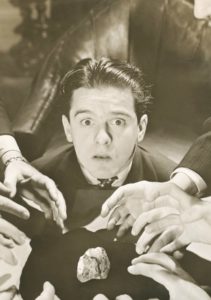 If I don’t remember much about how Angela came into being, I do remember very clearly where Freddy came from, because he invented himself.

Whenever I start putting together a book, I start with a vague idea for a plot or story, and then I think up some characters to serve that plot, which is one of the most fun parts of the process. In the case of The Riddle at Gipsy’s Mile (in which Freddy makes his first appearance), I had some idea of creating an ineffectual and annoying young man whose main purpose was to develop a pathetic and unrequited crush on Angela, and get in the way of the investigation. Freddy had other ideas, however.

From the first moment we saw him, lounging comfortably in an armchair and pronouncing confidently on his untried, but no doubt immense, talent for journalism (while demanding Angela serve him whisky), it was clear that here was someone who had not the slightest intention of being a mere hanger-on. And so it proved. We soon found that where Freddy went, mischief was bound to follow, most of which was caused by his own insufferable cheek. As it happened, he was not far wrong about his talents, and soon proved that he had a natural ability for sniffing out (and occasionally creating) a story: the perfect early tabloid journalist, in fact. And he was certainly not the lovelorn, moping-about sort either, being perfectly happy to sow his wild oats indiscriminately around the place.

Still, in later books he proved that he was not entirely a lightweight, but could also be a true friend. He supported Angela through her darkest hour and, together with William and Marthe, saved her from being hanged, for which she was suitably grateful, even though she found it difficult to admit it at the time.

Now he has the chance to be the hero in his own story, and it will be interesting to see what he decides to do with it (I take no credit for Freddy, since he pretty much writes himself). In his first adventure we see him embroiled in a mysterious death in high society—a difficult enough case, but further complicated by the antics of his exasperating mother, Cynthia. Will Freddy save the day? Probably, although not without a certain amount of chaos along the way…