Excerpt: A Case of Robbery on the Riviera 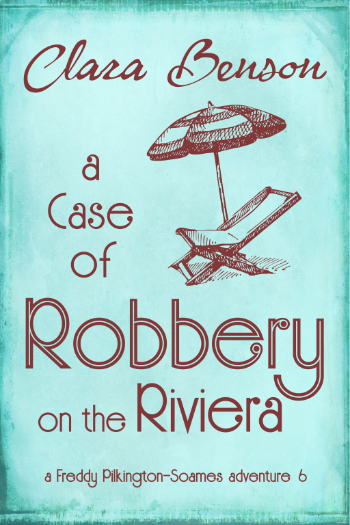 Angela and Freddy went up to the hotel reception desk.
‘I’m looking for an Edgar Merivale,’ said Angela to the man standing behind it.
He looked through the register.
‘We have no-one of that name here,’ he replied.
‘What about Edgar Valencourt?’
‘I am afraid not.’
‘Edgar de Lisle?’ suggested Freddy.
The clerk replied in the negative. Angela tried again.
‘Perhaps Edgar Smart?’
‘Do you not know his name?’ asked the man, amused.
‘She has several cousins, all called Edgar. Extraordinary, isn’t it?’ replied Freddy. ‘She hasn’t seen any of them in years, but they’re all staying in the area at present, only they forgot to tell us at which hotel.’
‘Ah, I see. Well, you are fortunate, because we do have a Mr. Edgar Smart. He is staying here with his wife.’
There was a short silence.
‘I beg your pardon, his wife?’ inquired Angela.
‘Yes, she is that blonde lady in the pink dress who came in just before you. Mr. Smart is out at present but I dare say he will be back soon.’
Another silence descended. Freddy glanced at Angela fearfully, but he need not have worried about any public unpleasantness. She drew herself up very straight and regarded the clerk down her nose.
‘Thank you,’ she said with dignified politeness. ‘We’ll wait for him. Come, Freddy.’
They followed the man’s directions and went out onto the hotel terrace. Angela placed herself at a table and drummed her fingers. It was impossible to tell what she was thinking. At last she spoke.
‘Fetch me a martini, Freddy,’ she said. ‘And you’d better make it a large one.’

« Return to A Case of Robbery on the Riviera